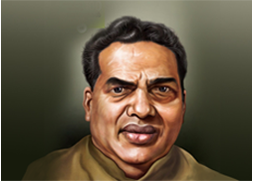 The ‘India Coffee House’ started by the Coffee Board in yearly 1940s, during the British rule. In the mid 1950's the Board closed down several Coffee Houses in different cities throughout India. At that time the Board taken decision to dismiss the employees. A large number of employees lost their jobs. That was a turning point, the well known great communist leader Com. A.K.G (Ayillyath Kuttiari Gopalan) took over the leadership of the said employees and organized Societies all over India in different states. That is “India Coffee Board Worker's Co-operative Society”.A lot of dismissed Coffee Board employees were dedicated their life, money and muscles for the formation of the Society. The first Society was formed in Banglore on August 1957. The first new generation Indian Coffee House opened in Delhi on 27th December 1957. Gradually, the Indian Coffee House chain expanded across the country, with branches in Pondicherry, Trissur, Lucknow, Nagpur, Jabalpur, Mumbai, Kolkata, Tellicherry and Pune by the end of 1958. In Kerala there are two Societies(old Malabar & Travancore-Cochin area) formed.All India Coffee Workers’ Co- operative Societies Federation -a federation of Indian Coffee Workers’Co-operative Societies- in 1960 December 17 at Delhi.

Trissure Society(Travancore-Cochin area)
First one Trichur Society Registered in Trissur on 10th February 1958. The first Indian Coffee House opened at Trissur on 8th March 1958. It was also the forth in the country. The Coffee House was inaugurated by our beloved Godfather Com. A.K.G. Trissur Society’s jurisdiction is Trissur to Thiruvananthapuram. The Society is Established on 1958 and the founder President was Adv. T.K. Krishnan, and secretary was Mr. N.S. Parameswaran Pillai. 50 Branches are running from Trissur. to Thiruvananthapuram under the control of India Coffee Board Worker's Co-operative Society Ltd. No.4227, Trissur. The Society registered with District Industries Centre, Trissur.

Kannur Society(old Malabar area)
The second one registered at Palakkad in 2 nd July 1958 under the Chairmanship of Adv.A.V.K.Nair under Madrass Co operative Society Act. In the first Director Board includes Sri.T.P.Raghavan Secretary, Sri.N.S.Parameswaran Pillai, Sri.T.K.Krishnan.MLA, Sri.Manikkan Nair, Sri.M.Kelu, Sri.N.Kumaran Etc. The first Indian Coffee House started 7 th august 1958 in Thalasserry. In the time of formation of this Malabar Society there are 11 Employees and 16 Members.After amendment of bye-law the registered office transferred Palakkad to Thalasserry and then at Kannur. Kerala Co operative Societies Act of 1969, The Malabar Society comes under the The Direct Control of Registrar of Co operative Societies, Thiruvananthapuram. After all This Society is called as “Indian Coffee Workers’ Co operative Society Ltd.No.4317,Kannur”. Total Turnover in 2019-2020 is Rs. 751,211,826.80, NetProfit of.Rs. 3,78,772.84 And have 30 outlets (Branches) operating in all major towns from Kasaragod to Palakkad .

The ‘Indian Coffee House’ started by the COFFEE BOARD in early 1940s, during the British rule. In the mid 1950's the Board closed down several Coffee Houses in different cities throughout India.